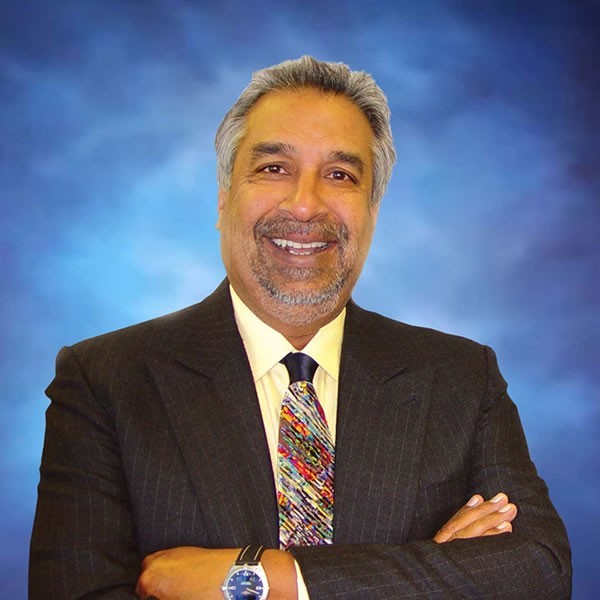 Background and Education in India. Vinod Gupta was born on July 4th, 1946 in the village of Rampur Manhyaran near Saharanpur, located 100 miles north of New Delhi, a village without electricity, roads, running water, toilets, televisions or cars.

After receiving his high school education in a village school in 1962, Vinod was accepted to I.I.T., Kharagpur, majoring in agricultural engineering. He received his B.Tech. degree in 1967.

Education in Nebraska. Upon his 1967 graduation, Vinod received his admission and graduate assistantship at the University of Nebraska at Lincoln, Department of Agricultural Engineering, under the leadership of Professor Bill Splinter. Dr. Splinter had been a visiting professor at IIT Kharagpur.

His family borrowed the money for his plane ticket, and in the summer of 1967, Vinod flew to Nebraska with one suitcase of clothes and $58 in his pocket.

Receiving his engineering degree in 1969, Vinod spent another two years at the University of Nebraska Lincoln, earning a Masters degree in Business Administration in 1971.

While at Commodore, Vinod was assigned the task of getting a list of every mobile home dealer in the United States. He bought lists from the business list companies existing at the time, and found them to be incomplete and out of date. He felt he could do better; so he ordered all available 4,800 Yellow Pages phone directories and set out to compile the list himself! He started this venture with $100 which he borrowed. Luckily, all the phone books were free.

When the books were delivered, they filled up the entire reception area; no one could get through the door of the receptionist’s office. Vinod was told that either the books were out of the office by 4 p.m. or he faced termination. A moving company relocated the boxes to his garage.

With the help of his boss, Vinod sorted the books by state. Commodore told them they could work on their own time, and the company would consider buying the list from them. When the list was completed, Vinod gave Commodore two options: Pay $9,000 for exclusive rights to it, or receive it free of charge and permit Vinod and his partner to sell it to Commodore’s competitors. Balking at the $9,000 cost, Commodore chose the latter option.

Borrowing $100 from the Ralston Bank, Vinod invested the money in mailers he then sent to other mobile home manufacturers. Within three weeks, he’d received checks for $13,000 and orders for $22,000. Vinod had found his niche.

American Business Lists (ABL) expanded quickly. With a philosophy of identifying the customer’s needs and offering solutions backed with first-class service, Vinod methodically added other industries to his database. Motorcycle, bicycle, boat, automobile, tractor, and CB radio dealers were among the first targets, and Vinod found that the demand for accurate business-to-business marketing information extended to just about every industry.

It took 13 years, but in 1986, ABI finally had the entire Yellow Pages in its database, ready to be accessed in any form that customers wanted. Vinod, however, continually plowed back the profits into his growing business to meet the increasing demands of his customers. American Business Information goes public in 1993.

infoUSA (formerly American Business Information) From the company’s inception in 1972 through the early 1990’s, the main focus was primarily on providing business information. With the acquisition of companies such as Donnelley Marketing, Database America, ProCD, Walter Karl and JAMI, and rapid internal growth, the company increased its presence in consumer databases and greatly increased its ability to provide database marketing and analytical services. As a result, the name American Business Information, Inc. no longer adequately captured all of the company’s business activities. infoUSA’s information is derived from 5,200 phone directories covering the entire U.S. and Canada. Information is also gleaned from company annual reports, 10K’s, SEC information, government publications, trade journals, business magazines, newsletters, and top newspapers.

Major Charitable Contributions. Vinod has recognized the value of education in his own life. As a result, he has made education a primary beneficiary for his charitable contributions. Most recently he donated $1 million for a women’s polytechnic in his village of Rampur Manhyaran. In 1991, he gave his alma mater, Indian Institute of Technology, $2 million to create the Vinod Gupta School of Management. This institute now offers an MBA program to engineering graduates with 5 years of work experience. He also set up an Intellectual Property Law School at IIT - Kharagpur by investing over $2 million.

He has also donated money for a new science block at his former village school and provided buses for the girls’ school.

Vinod’s donations in America include $2 million to establish a curriculum for small business management at the University of Nebraska at Lincoln. He’s also donated an additional $500,000 to the university to set up a scholarship fund for minority students who want to enter its science or engineering schools.

Current Affiliations. Vinod was awarded an Honorary Doctorate from Monterey Institute of International Studies and an Honorary Doctorate from the University of Nebraska and I.I.T., Kharagpur. He was appointed by President Clinton to serve as a Trustee on the Kennedy Center for Performing Arts in Washington, D.C. He was nominated and confirmed to be the Unites States Consul General to Bermuda. President Clinton also nominated Vinod to be the United States Ambassador to Fiji, but due to business commitments, he withdrew his name from consideration. Vinod serves on other various civic and educational boards.